In order to deliver cleaner and healthier energy to the public, KOMIPO has replaced the environmental monitoring facilities of its thermal power plants to the world’s top standards and operates safe power plants preventing any concerns about particulates and environmental pollution. It is leading the way for the drive towards energy conversion in Korea through the continued development of a wide variety of renewable energy sources. 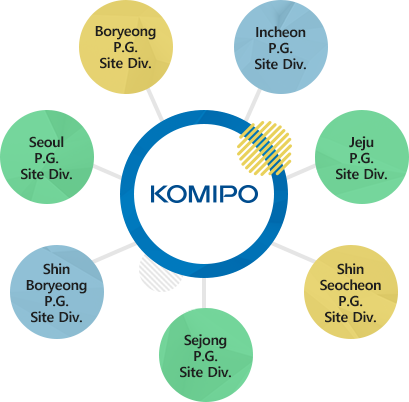 Having successfully built the world’s first large-capacity urban underground LNG-fired combined cycle power plant to supply stable power to Seoul with a population of 10 million, KOMIPO continues to make history even at this very moment, going beyond Korea by exporting its energy technology across the world and expanding Korea’s energy sector.

KOMIPO, an energy company for the people

Based on its ideas that no others have come up with and its spirit of taking up challenges that no one has dared to undertake, KOMIPO strives to ensure a rich and healthy life of the people, building know-how and experience at the forefront of the energy industry, and will continue to remain as a reliable energy company for the development of not only Korea but also the world.