Through equity investment, KOMIPO is participating in a wide variety of energy businesses in Korea and taking the lead particularly in the supply of eco-friendly electric power with brisk business development in the new & renewable energy field.

Hyundai Green Power is a special purpose company (SPC) established for the consortium of KOMIPO, Hyundai Steel and Industrial Bank of Korea to carry out a power generation project using by-product gases from Hyundai Steel as fuel.
As the company produces electric power by recycling by-product gases from the steel works furnace, which had been emitted into the air, as fuel, the power plant has high economic viability and an energy recycling effect compared with generation facilities using LNG or heavy oil

As a combined heat & power plant with general SRF (Solid Refuse Fuel) and coal mixed combustion, this power plant is providing a cheap and stable supply of heat to the tenant companies in Inksan 2 Industrial Complex and also is the nation's first collective energy facility using new & renewable energy.

Gangwon Wind Power, the largest-scale wind farm in Korea, was established in 2001 and completed and entered into production in October 2006. Since March 2006, with registration of a CDM project with the UNFCC (United Nations Framework Convention on Climate Change), the plant is securing CERs.
To realize zero GHG emissions for the 2018 PyeongChang Winter Olympic Games, as the plant is located in the host city of the Olympic Games, it is spearheading the response to climate change, including donation of CER 20,000 tons and a reduction of about 127,000 tons of CO2 annually, as its first participation in the CDM business. 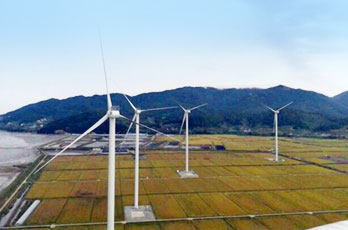 Yaksu ESS is an SPC established to accomplish a project to store part of the electricity produced at the Yangyang Yaksu Wind Power Plant in an ESS (Energy Storage System) and supply it at the time of electric power peak demand.
Completed in December 2016, Yaksu ESS is, while contributing to the stabilization of the electric power system, a cornerstone for accompanied growth-type business development, particularly as the first new business model in Korea promoted as a construction/lease type private wind power plant. 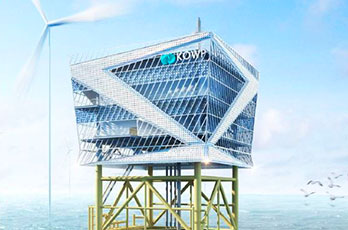 Korea Offshore Wind Power is a project presently under joint development by power companies, including KOMIPO and KEPCO, as a national policy project to realize the world's top 3 strong wind power country and strengthen the global competitiveness of the domestic offshore wind power industry,
The project region is offshore of Yeonggwang-gun, Jeonnam Province. A total of ￦12.5 trillion is scheduled to be invested by 2030 for a total capacity of 2.3GW through the stages of verification-pilot-dissemination.

As Korea's first and largest bio fuel-fired power plant, Gunsan Bio is scheduled to be built within the Gunsan 2 National Industrial Complex. KOMIPO plans to participate in the project with a 29% equity and carry out technical consulting for the construction and operation of the plant.

School PV generation projects are designed to realize educational welfare through resolution of seasonally sultry and cold classrooms due to a lack of school operating funds and also to activate the economy through investment expansion in the new & renewable energy field. Hatvit Saessak power plant is a project to build and operate 200MW (target capacity) PV generation facilities on the building rooftops of 2,000 schools (about 18% of the elementary, middle and high schools nationwide) with a capital investment of ￦400 billion (KOMIPO invested ￦16.65 billion in '16).